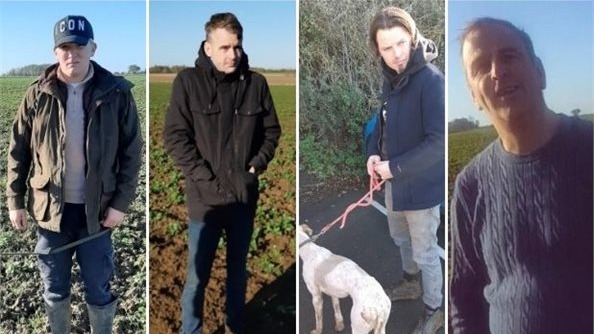 A group of men caught running in Cambridgeshire have received orders banning them from similar activity in four counties.Thomas Connors, 43, Patrick Rooney, 36, Anthony Connors, 34, and James Bell, 20, were spotted by police ashore at Abbotts Ripton in November last year.

Officers from the Police Rural Crime Action Team caught them walking through a field in search of hares.

The effectiveness of CBOs will be tested, because if they violate them, they will be re-arrested and brought to court with a maximum sentence of five years in prison. The flat, rural landscape of East England makes it a popular area for hare racing and other rural crimes, but as a force we are working hard to bring offenders to justice.

The men all pleaded guilty to daytime trespassing (poaching) and each received a three-year criminal conduct order.

The order covers Cambridgeshire, Norfolk, Suffolk and Essex and prevents them from doing the following:

All four were also ordered to pay £ 178 in compensation to the owner of the fields and wildlife conservation areas.

The court result comes after Cambridgeshire Police teamed up with six other police forces in the eastern region to combat the hare race.

The boundaries between the forces, which include Bedfordshire, Cambridgeshire, Hertfordshire, Norfolk, Suffolk, Essex and Kent, have now been removed when using certain tactics, making it easier to arrest and prosecution of offenders.