Kirby and the Forgotten Land is pretty much everything I want from a Kirby game, aside from maybe a faster pace. The way copy abilities are implemented feels novel, and the setting is truly unique for a Kirby game. It’s great fun, just like a Kirby game should be.

I feel like it’s redundant to call me a Kirby fan. Everybody Loves Kirby, both the games and the character. The series is pretty straightforward, ridiculously charming, and as adorable as it gets. What’s not to like? Kirby and the Forgotten Land is no different, other than the whole “post-human planet Earth” setting. This change does wonders for Kirby however, as it is most interesting Kirby game since Kirby’s Epic Yarnat least for me.

The story follows your classic Kirby formula: things are cute and fun, trouble arises, an eldritch demon is behind, Kirby wins and relaxes with food and friends. This time, Kirby is sucked into a portal to a seemingly post-apocalyptic world, where he meets Elfilin, a cute little guy who travels with Kirby to rescue all of the Waddle Dees from their captors, the Beast Pack, in this new world. The story is unleashed at the end, in the best and most extreme way possible. It’s still for kids and all, but I was immensely amused by the last quarter or so of the game, and you probably will be, too. Also, Meta Knight and King Dedede show up, and they’re as cool as expected. 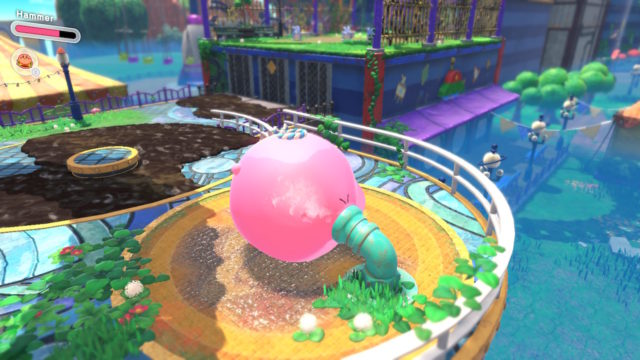 This is the first fully 3D Kirby Game (crystal shards on the N64 was only visually 3D, after all), making it a big step up for everyone’s favorite Pop-Star Protector. Kirby himself moves rather smoothly through this new dimension, as running or floating feels responsive and satisfying. Some streamlining has been done to make this transition smoother, such as ability enemies being automatically swallowed without button input and attacks generally hitting if they looks as they hit from your point of view. These allowances are a great experience in every way and make Kirby and the Forgotten Land feel somewhat similar to other 3D platformers, while being distinctly Kirby experience.

“I’m very impressed with the amount of content in this game, and it will keep even die-hards playing for a while.“

Copy powers, in particular, are overhauled quite impressively. You can upgrade most powers at least twice, which leads to new hats and much more powerful abilities. For example, the Ranger ability ranges from a two-pistol gun to a space laser that can be charged for insane damage. You unlock upgrades by finding blueprints in levels, which makes exploration more exciting and interesting. Trying out each ability can be fun, as they’re pretty much all broken in their own fun way. I wish there were maybe a few more abilities as the number seems a little low, but with the leveling differences being so many, it’s understandable. 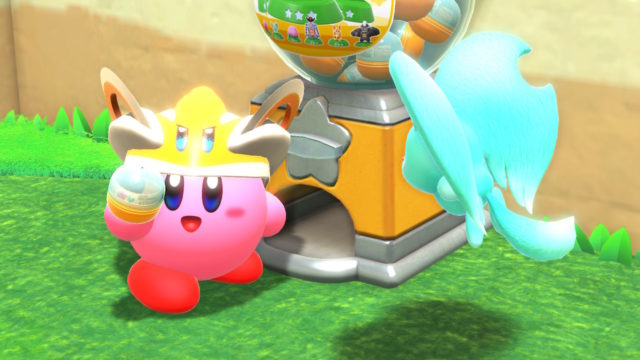 This combined, with Waddle Dee Town in general, feels like you’re still unlocking things and progressing. There’s even a post-game sturdy enough to forgotten land, full of remixed levels and secret bosses to fight. There are several series of gachapon toys to collect (which is all my Shen Mue-confused brain needs for bonus content,) secret ability upgrades, citywide mini-games, and more. I’m very impressed with the amount of content in this game, and it will keep even die-hards playing for a while. I wish the game was a little faster in Waddle Dee Town, because having to cycle through timed text boxes every time you get ability upgrades is tedious work, and there’s a lot of text in general that could be shaved in these parts. Even just making it skippable would be nice, since I’d rather explore the town than figure out what each store and character is doing.

Kirby and the Forgotten Land looks pretty cool, with lots of color to make even long abandoned places feel alive and happy. The designs for the new animal enemies and bosses are cartoonish and adorable, and the new iterations of fan favorites like King Dedede and Bonkers feel perfectly in line with this crazy new environment. Do I even need to say that the music in a Kirby is the game great? You can listen to tracks later in the game, and many of them are worth hearing again. Or you can just listen to the Masked Dedede theme on loop, which I can’t stop doing.

The last word
Kirby and the Forgotten Land is a great first foray into the third dimension for Kirby and his Pop-Star pals. I wish there were less tutorials and a few more powers, but everything else about the game is fun, charming, and generally awesome.