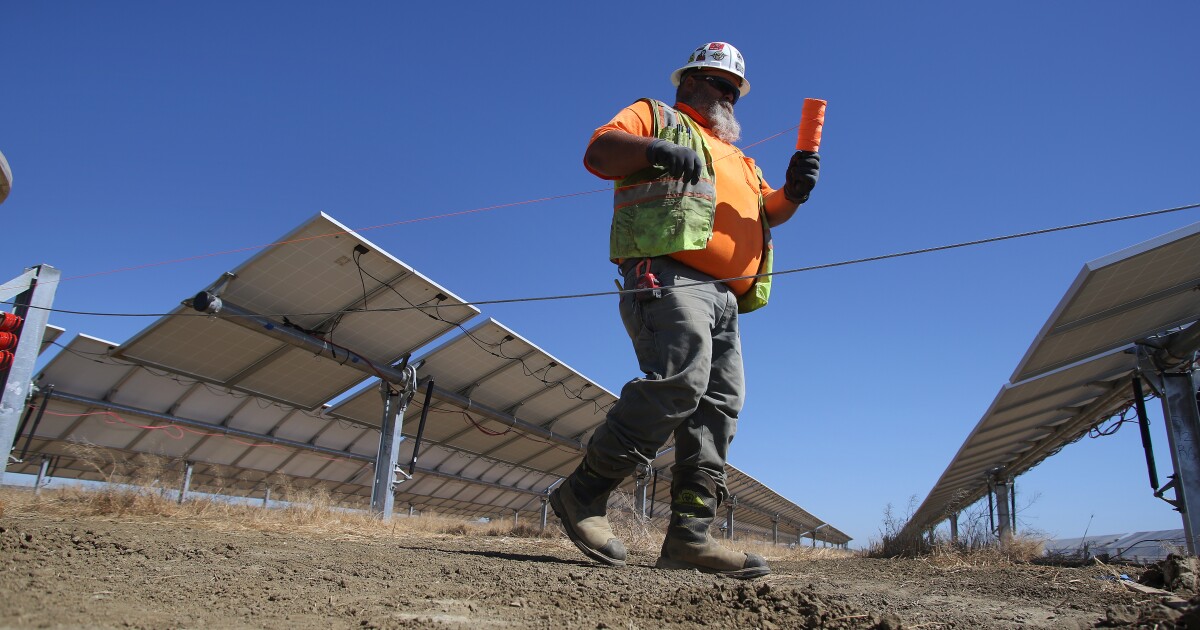 A surefire formula for producing clean energy is lots of sun and less hay.

Or less tomatoes and – God forbid – a reduction in almonds.

This would have a double advantage. In addition to producing carbon-free electricity, it would save a lot of scarce irrigation water. And it would prevent the valley’s abused aquifers from sinking further, drying up wells and subsiding land while cracking canals and bridges.

Agriculture uses 80% of our developed water in California. And the lifeblood of food production has become less reliable as carbon-induced climate change alters storm patterns and reduces the Sierra’s snowpack.

But we need all that agriculture to feed ourselves and much of the nation, right? No, not entirely. Much of this food, especially almonds and pistachios, is shipped to foreign countries, mainly in Asia. This therefore means that we also export our scarce water.

“The San Joaquin Valley faces a monumental shift in land use over the next two decades,” wrote PPIC water experts Andrew Ayres and Curtis Seymour.

“Promoting solar expansion on fallow farmland…could support two major goals at once: the state’s clean energy goals while easing the economic pain of transitioning some land away from the Agriculture.”

“Two important but apparently unrelated elements [state] laws are the engine of change,” they noted.

One is the Sustainable Groundwater Management Act 2014 aimed at balancing groundwater basins by the early 2040s. could produce it naturally.

Farmers “who think they are going to get more [aquifer] recharge from surface water that no one else uses are overly optimistic,” Ayres told me.

“Some farmers irrigate their crops entirely with groundwater. In the future, many will no longer be able to do this.

It is estimated that at least 500,000 acres of farmland in the San Joaquin Valley will be set aside to comply with the groundwater law.

“The land comes out of production,” Ayres says. “The next question is, ‘What do you do with it then?’ “Simply let this land become unproductive? You kick up dust or grow weeds and don’t contribute to the economic vitality of the valley? Solar could cover up to 40% of the territory.”

“And solar is very profitable. As a crop it has a very good yield – on par with some high value tree crops. Otherwise more profitable.

“California has set itself a Herculean task,” the PPIC blog post noted. “We are going to need a sustained and unprecedented development of renewable energies. Solar will be an important element.

There is already solar agriculture in the Valley – producing three gigawatts, PPIC reported. An additional 20 gigawatts – or 20,000 megawatts – have been offered.

But there is a very big catch. There is not enough power grid capacity to transmit much more solar power to consumers.

“The problem is only going to get worse unless there are big investments to bring transmission capacity to the valley,” Ayres says.

“At the end of the day, we’re going to need…a huge grid investment to get this solar out across the state…. There is a real question of whether this is going to be possible.

It’s a handy coincidence that the federal government has billions to help out if California can jump in and step up for it. The $1 trillion infrastructure bill signed by President Biden in November includes multi-billion dollar matching grants for states, local governments and utilities to modernize power grids.

So Governor Gavin Newsom should lead the charge of that federal money — if he and others can figure out how to spend it first.

The state could also set aside some of its budget surplus to help upgrade the grid and provide tax incentives for growing solar power in the valley.

To meet its climate change goals, it is estimated that California will need to triple energy production from each of these renewable sources: wind, solar farms and rooftop solar.

Newsom and the Public Utilities Commission are concerned about how to manage rooftop solar power, used by 1.3 million consumers who have spent thousands of dollars installing panels.

The PUC has agreed with private utilities that they pay far too much for unused solar electricity generated at home. Non-solar consumers – many of whom are poor – are making up for lost utility revenue by paying higher electricity rates than they should, the PUC said.

So the regulatory agency has proposed a dramatic reduction in rooftop solar subsidies and a fee – a tax – for grid connection.

Rooftop solar panel installers and owners howled. And the PUC backed off. He tries to find a compromise.

My solution: cut subsidies in half — not quadruple, as proposed. Forget the dumb dumb tax.

And the state should offer tax credits for installing signs, like the federal government does. For storage batteries too.

If Newsom is as concerned about climate change as he says he is, he will use the state budget to encourage solar power on rooftops and farms. And neither uses a drop of water.

How to pre-order Kirby and the Forgotten Land