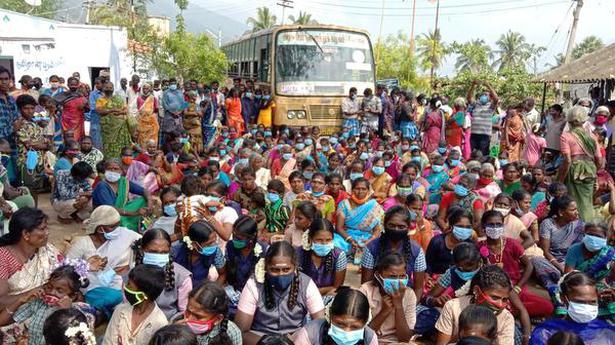 Opposing the decision to draw water from agricultural land near the Gunderipallam reservoir and supply it to agricultural land 6 km away, residents of many villages set up a roadblock at Vinoba Nagar in TN Palayam here Thursday.

A borehole was drilled on land belonging to Thangavel near the reservoir which falls under the Kongarpalayam panchayat.

It has been proposed to supply water through a 6 km pipeline to lands belonging to Murugesan, Andamuthu, Eswaran, Chellappan and Rani.

Two years ago, pipes were laid over 4.5 km while they were not laid over 1.5 km due to strong opposition from the villagers. People said that if the water from the well was drawn and used for agricultural land in another area, the groundwater would be affected in the villages of Vinobanagar, Kongarpalayam and Vaniputhur and wanted the project to be scrapped. The project was stopped for two years.

The five landowners all went to court and got pipeline laying orders and also wanted police protection to be granted for the works.

More than 250 people blocked the road in Vinobanagar, disrupting the flow of vehicles. Gobichettipalayam DSP, the head of the Palanidevi revenue division and Tahsildar Thiyagaraj held talks with the demonstrators. The villagers asked for 15 days to go to court and get a suspension order. They also wanted the work to stop in the meantime. The officials assured them that the work would not be resumed, after which the protest was withdrawn.